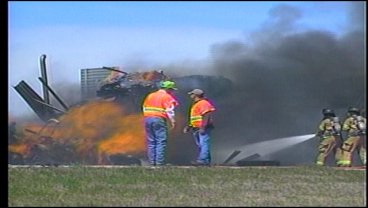 ARDMORE, OK- It was a big bang and a huge cloud of black smoke over the city of Ardmore, Tuesday, after a semi-truck exploded on Interstate 35.  Meredith Saldana was first on the scene, she has the very latest on this story.

Luckily no one was hurt, but it was a very scary situation for everyone in the area.

Emergency crews rushed to the scene where a semi-truck had exploded just north of exit 33 on Interstate 35.

The truck was fully engulfed and just minutes later, the southbound side of Interstate 35 was shutdown, backing traffic up for miles.

The driver of the big rig, Marvin Randolph, was driving back to Shreveport, Louisiana, when he says he smelled something coming from his truck.

"I seen my window which had the film on it and I stopped and looked up under the hood, says Randolph. "It was on fire. I got back, something jumped on my arm and it just exploded!"

Emergency crews had a hard time controlling the flames because of the diesel fuel that continued to burn.

"It helps compress the fire by suffocation. It cuts off the oxygen to the fire and helps it to go out quicker," says Ardmore's Interim Fire Chief Cary Williamson.

The intense fire then spread to dry vegetation nearby, and on a red-flag danger day, with winds whipping nearly 20 mph, extra firefighters were brought in to battle the grass fire.

"I could not believe the grass fire moved so quickly in this heavy wind, it's really amazing," says Richard Reeh, a stranded motorist. "I thought it might jump across and get this line of cars."

"Yeah, I need to get back home," says Derryl Hendrix of Ft. Worth, Texas.

But everyone was thankful that the driver survived, what could have been, a much more dangerous situation.

"Yeah I'm fine, I'm fine. I mean I don't have no problems just shaken up you know," says Randolph.

The truck was hauling scrap pieces of cardboard.