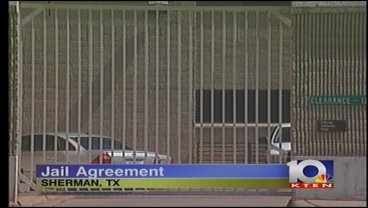 GRAYSON COUNTY, TX -- Grayson and Fannin County are teaming up to solve a major jail issue. The neighboring counties made an agreement that allows overflow inmates from the Grayson County Jail to be transferred to the Fannin County Jail for cheaper than it would cost to keep them in Grayson County. Deeda Payton spoke to Commissioner Johnny Waldrip about the deal.

Waldrip says it costs about $52/day to house an inmate in Grayson County. With this agreement, the county will only pay $48/day to transfer and house overflow inmates into Fannin County. Waldrip attributes the cost difference to cost of living in the different counties. He says Fannin County pays jailers a lower wage and they have lower maintenance costs because their jail is a new building.

The Grayson County Jail has been over every option to try and solve the issue of inmate overflow, but have been unsuccessful. Waldrip says this agreement accomplishes all of their goals for a reasonable price. "With this contract, it saves us money because we can house them cheaper plus they will transport so we don't have to tie our deputies up."

Waldrip says another benefit to this deal is that they get to work with their neighbors, and the inmates will be closer to home.

The agreement is effective immediately. Grayson County's contract with Fannin County is year-to-year. Each year they can re-evaluate and negotiate.