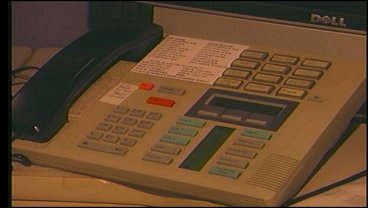 BRYAN CO., OK - It's a phone call no parent wants to receive - that your child is hurt or in danger. As Katy Blakey explains - being trained to handle distress calls doesn't make taking your own child's call any easier.

The Bryan County 911 Center is rarely a quiet place. Dispatchers jump from one call to the next.

For dispatcher Julie Thompson, December 1, 2009 was one of those days. She handled dozens of medical calls, several car accidents, and then, another.

"We got a call that there was a woman who rolled her car and the car was on fire," said Julie.

Within seconds Julie had paramedics on the way and an air-ambulance on standby.

Julie's training kicked in. She knew what to do, knew who to call. The only thing she didn't know was the person in distress - the woman desperate for help at the accident scene - was her daughter.

Julie's daughter Geonna remembers being trapped inside her crumbled car. Yet through the chaos and pain all Geonna could think about was her mom - hoping the woman trained to be calm under pressure wouldn't panic.

"I was hoping," said Geonna. "I was praying that she didn't get that call."

But it was Julie who took the call, never realizing it was her daughter's life on the line. It was a paramedic on the scene who called back and broke the news.

"I was out the door in less than 2 minutes when I realized it was my daughter."

Like most moms Julie couldn't get there fast enough and since the accident she's been by her daughter's side.

Through it all Geonna has remained positive. The accident severed her right foot. She's now confined to a wheelchair and must endure painful physical therapy, but it doesn't get her down. Her mother says she has a fighting spirit.

"It could be worse. I'm grateful that I'm here."

Both mother and daughter call the days since the crash an unusual journey, but one that's brought them closer and made them stronger.

"There's always a silver lining in a dark cloud."

Both mother and daughter say they are extremely appreciative for their friends and support within the Bryan County community. Dozens of people turned out a few weeks ago to help raise money and offer support for the family. Geonna plans to finish school at SOSU when she is well and continue her job at Big 5 Head Start.