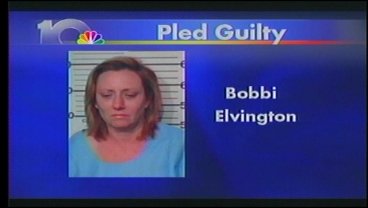 SHERMAN, TX -- It was an emotional day in a Grayson County Courtroom. Bobbi Elvington pleaded guilty to intoxication manslaughter. Deeda Payton reports on how the two families are coping.

That crash took the life of a grandmother on highway 75 in Van Alstyne. She was going to visit her grand kids when her life was cut short. Only one person was killed in last month's crash, but two families will forever be affected.

It all started February first with two mangled cars and a woman killed. "How is the family holding up? They're not. She has four kids and one adopted daughter and 13 grand kids and she just had her first great grand baby eight months ago," said the victim's son-in-law, Harold Epperson.

It all ended Monday with two families coping and two women taken away from their families. "We've been going through a horrible situation as much as the other family has also," said Elvington's brother, Travis Peterson.

She received a 14 year sentence. "It's a sad deal for everybody and she did her part and took responsibility," said District Attorney, Joe Brown.

It was an emotional day that both families hope will serve as the final chapter of the nightmare they've been living.

The victim's family says Elvington did write them a letter explaining how truly sorry she is for their loss and for her actions. They say they accept her apology and hope that their story will deter others from drinking and driving.