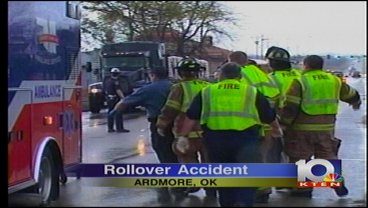 ARDMORE, OK -- A rollover wreck in Ardmore had traffic backed up for about an hour.
It happened just after 3 o'clock Wednesday afternoon. A truck headed northbound on P Street Northeast lost control, hit a curb and rolled over.

The passenger of that truck was partially ejected. P Street Northeast was shut down for a little less than an hour. Both the passenger and the driver suffered minor injuries but will be okay.

Police say speed was a factor in this accident.