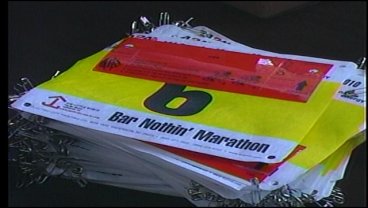 The Arbuckles to Ardmore Marathon is just a few days a way.  Organizers were preparing for just a couple hundred runners, as of Wednesday, more than 900 have registered! Meredith Saldana has more on this story.

Organizers say they are overwhelmed by the number of runners who have registered.

But with all proceeds going to the new cancer center in Ardmore, they're excited to see the turnout!

Arbuckles to Ardmore, it started as a way to raise money and awareness for Ardmore's new cancer center.

But organizers had no idea the small town of Ardmore would become a race destination for runners across the map.

Allison Smalley who organized the event says, "We've got people coming from all over the United States. It is just amazing that this is happening in our hometown. I think we've got about 13 states represented and Canada and Scotland, so it's an amazing group."

And it's not just good news for the cancer center, the city of Ardmore and local businesses will likely benefit as well.

Smalley says, "I know several of the hotels are filled. People bring their families, if we've got 1,000 or 1,100 runners you've got 2,000 or 3,000 people here just because of this. And they're spending money, they're learning about Ardmore and about southern Oklahoma and I mean all of this is good."

Phillip Capshaw is a marathon runner and tri-athlete, he is also surprised by the turnout and says he's excited to finally run a race, here in his hometown.

"The excitement if you've ever been to one of these events there's just so much energy in the air I mean it's fantastic. I mean, 1,000 runners plus in one place? It's great!"