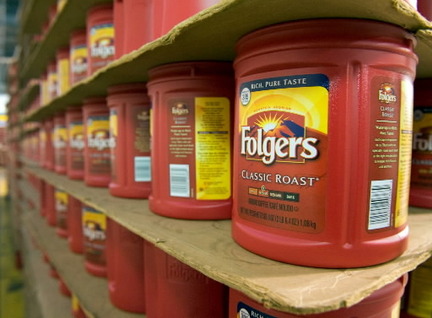 The Sherman Folger's plant will close within a year, according to a press released from the J.M. Smucker Company, which owns the Folger's brand.

In an effort to improve its supply chain, the food giant announced it would close four plants that make the coffee as well as the company's signature fruit spreads. The other coffee plant is in Kansas City.

In Sherman, the closing would happen by next spring and will affect nearly 100 workers. Sherman city officials were assured the employees leaving would get a generous severance package, with many of those longtime workers taking early retirement.

In the press release, Tim Smucker, chairman of the board, said, "We are confident that this strategic decision is important for the long-term growth of the company. However, it was difficult given the effect on employees, their families, and the communities related to the impacted facilities. We appreciate the contributions of our employees and are committed to treating them with fairness and respect as we transition these facilities over the next several years."

Folger's shares the Sherman plant with the Sunny Delight brand, which some Sherman officials feel is a growing brand. There could be room for expansion of Sunny D into the vacated Folger's space come next year, which offers a glimmer of hope for those concerned about the economic impact of the move.

"We have a good, long working relationship with Folger's," said John Boswell, president of the Sherman Economic Development Corporation. "And as they transition through this time, we want to help minimize the affect of this closure on our community."

The following is the press release issued by the Smucker's company regarding the closing.

The J. M. Smucker Company today announced plans for significant investments to improve its supply chain as part of its ongoing efforts to enhance the long-term strength and profitability of its leading brands.

In support of its approach for continuous improvement, the Company completed an extensive analysis of its coffee and fruit spreads supply chain network.  As a result, it will commence a multi-project initiative to be implemented over the next three years.  The initiative is a long-term investment to optimize production capacity and lower the overall cost structure.

The Company's plans include significant capital investment in its coffee and namesake fruit spreads businesses over the next three years totaling approximately $220 million.  Additionally, approximately $190 million in restructuring charges will be incurred over the course of the plan, of which $90 million are noncash charges.  Key components of the plan include:

"This initiative is consistent with the commitment we've had to continuous improvement throughout our history," added Richard Smucker, Executive Chairman and Co-Chief Executive Officer.  "The significant investment we are making in our coffee and fruit spreads businesses will help us achieve our long-term financial objectives, strengthen our category leadership positions, and enable us to deliver even greater value to our consumers, customers, and shareholders."

Construction of the new Orrville manufacturing facility is expected to commence in the fall of 2010 with initial production start-up in the summer of 2012.  Production is anticipated to be phased in through the summer of 2013, at which time the Company expects to close its Memphis and Ste. Marie facilities.

The new facility replaces the Company's existing manufacturing plant in Orrville which is over 60 years old.  As a result of new technologies and efficiency improvements designed into the new facility, a reduction of the Orrville plant workforce of approximately 40 percent is anticipated over the next three years.

Upon completion of the new facility, production of the Company's fruit spreads, syrups, and ice cream toppings for its consumer and foodservice businesses in the U.S. and Canada will primarily be concentrated in Orrville and Ripon.  Planned capital investments for equipment and technology at the Ripon plant will support increased volume and provide operational flexibility.

To support the consolidation of its coffee operations, the Company is investing $70 million in its New Orleans coffee facilities.  The investments will expand production at its two production facilities in New Orleans and expand capacity at its nearby finished goods warehouse.  Significant upgrades have been made to the New Orleans facilities over the past several years to further enhance the business continuity plans specifically related to hurricane-related events.  The Sherman and Kansas City operations are projected to close in the spring of 2011 and summer of 2012, respectively.

As a result of these initiatives, manufacturing facilities in North America will be reduced from 22 to 18.  When fully implemented, these actions are estimated to result in a total reduction of approximately 700 full-time positions, or 15 percent of the Company's workforce.

Based on preliminary project timelines, capital expenditures of approximately $90 million, $105 million, and $25 million are expected in fiscal 2011, 2012, and 2013, respectively.  The Company estimates its total annual capital expenditures to range between 4 percent and 5 percent of net sales during these three fiscal years.

The Company plans to finance the projects through a combination of existing cash balances, cash provided from future operations, and existing credit facilities.  Further, the Company believes that cash expenditures associated with these initiatives will not have a significant impact on its ability to meet other cash requirements.

The Company expects annual savings will approximate $60 million when fully implemented, excluding one-time costs.  Initial benefits will modestly impact fiscal 2011 and continue to increase each year until fully realized in fiscal 2015.  The Company expects to reinvest a portion of the future savings into the business.  The savings will primarily impact the U.S. retail coffee market segment and U.S. retail consumer market segment profit margins.

Long term, the Company is committed to its strategic targets of growing net sales on average at 6 percent and earnings per share at a rate of 8 percent or greater, per annum, excluding the impact of restructuring and merger and integration charges.

About The J. M. Smucker Company

For more than 100 years, The J. M. Smucker Company has been committed to offering consumers quality products that help families create memorable mealtime moments.  Today, Smucker is the leading marketer and manufacturer of fruit spreads, retail packaged coffee, peanut butter, shortening and oils, ice cream toppings, sweetened condensed milk, and health and natural foods beverages in North America. Its family of brands includes Smucker's®, Folgers®, Dunkin' Donuts®, Jif®, Crisco®, Pillsbury®, Eagle Brand®, R.W. Knudsen Family®, Hungry Jack®, White Lily® and Martha White® in the United States, along with Robin Hood®, Five Roses®, Carnation®, Europe's Best® and Bick's® in Canada.  The Company remains rooted in the Basic Beliefs of Quality, People, Ethics, Growth and Independence established by its founder and namesake more than a century ago.  The Company has appeared on FORTUNE Magazine's list of the 100 Best Companies to Work For in the United States 12 times, ranking number one in 2004. For more information about the Company, visit www.smuckers.com.