Cost of Buckling Up - KTEN.com - Texoma news, weather and sports

Cost of Buckling Up 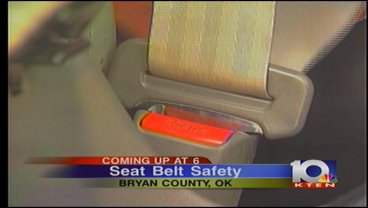 OKLAHOMA - When it comes to buckling up Oklahoma drivers lag behind Texas motorists. So what's preventing Oklahomans from getting the message? Katy Blakey explains.

"I've worked crashes for years," said Sewell. "Worked accidents where kids died, adults died - people that I know. And it's because they didn't have their seatbelt on.

Sewell has responded to too many bad crashes to be forgiving on drivers who break the law.

"You look at that and think, 'Would they have had that happen, had their seatbelts been on?'"

Buckling up is the law but some Oklahomans still chose to ignore it. Fatal crashes in the Sooner State increased slightly in 2008. More than half of the drivers involved in fatal crashes were not strapped in and 67 percent of passengers in fatal wrecks chose not to wear their seatbelt, either.

"You've got a better chance of living with seatbelts. That's a fact of life."

The numbers don't lie. So why are some Oklahomans still refusing to buckle up?

Sewell points to a loophole for drivers of farm exemption vehicles and the low cost of breaking the law. But says his mission is to teach kids the importance of buckling up when their young.

"Education is the key to seatbelts."

A big factor could be the cost of a ticket. A seatbelt ticket in Oklahoma will cost you just $20. In Texas, a ticket can cost as much as $200.