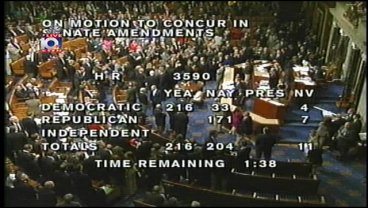 WASHINGTON (AP) - The Democratic-controlled Congress has approved historic legislation extending health care to tens of millions of Americans who lack it and cracking down on insurance company abuses.

The vote in the House was 219-212. Republicans were unanimously opposed. The bill now goes to President Barack Obama for his signature.

The action late Sunday capped a yearlong quest by Obama and Democrats to overhaul the system and reshape a sixth of the economy.

President Barack Obama says the health care legislation passed Sunday night by the House is "a victory for the American people" and "a victory for common sense."

The bill "will not solve every problem" in the health care system, Obama says, but "moves us in the right direction." Obama praised Speaker Nancy Pelosi and other Democrats for getting the bill through Sunday night's 219-212 vote, saying they proved that the government "still works for the people."

The heated debate that surrounding the legislation will fade away, Obama said, leaving a "health care system that works better for the American people."