A True Rivalry: Guns VS Hoses 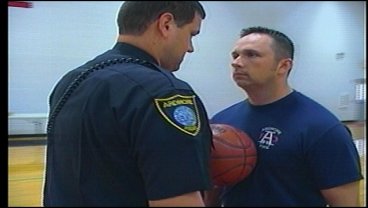 ARDMORE, OK- Guns and Hoses, there was a friendly rivalry going on in Ardmore, Friday. Nathan Thomas reports.

Saturday is the annual police versus fire department basketball game and I hit the streets to find out who this year's champion will be.

It's a face off, who needs March Madness when our local first responders will put their guns and hoses aside and meet center court, Saturday, to raise money for the March of Dimes.

It's so controversial, even the chief's had some words.

Police Chief Keith Mann says, "Well, I think the police department will be- we are full time employees and fire department normally doesn't work but about once a month!"

Fire Chief Cary Williamson says, "I just can't believe the police are going to pull themselves away from the doughnut shop long enough to come play ball!"

Chief Mann responds, "Well that may be, but we have a lot of energy to do it."

Chief Williamson adds, "That's good, but without your badges and your guns y'all are pretty much worthless anyway. It will be a good game!"

Confidence is so high, the police department has already made a post-game gift.

Officer Larry Payne says, "This is the condolence letter that the police department has put together for the families of the firemen who are going to be losing the basketball game, Saturday."

But don't worry, the police aren't the only ones with tricks up their sleeves.

Fireman Justin Roady says, "The police department don't stand a chance, we got a secret weapon-- there he is."

The game is Saturday at 11 am at the HFV Wilson Center in Ardmore.

No matter who wins or loses, it's all for a good cause.

Proceeds go to the March of Dimes organization.