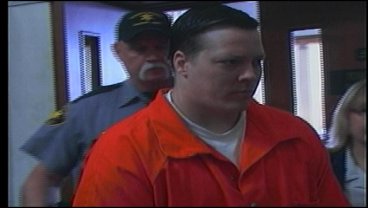 CARTER CO., OK- In February, a Lone Grove man on trial for the 2007 murder of his mother was found not guilty, by reason of insanity. Friday, he was back in court. Meredith Saldana has the latest.

At that February trial, District Attorney Craig Ladd told me he was confident that Lee Purser would be sent to an institution.

Friday, that decision was made.

District Judge Tom Walker took less than 30-minutes to decide that Purser would, in fact, be turned over to the department of mental health services.

His decision was made after receiving a couple of reports from a psychiatrist and psychologist that evaluated Purser.

Based upon their review and evidence presented at the trial District Judge Walker was able to make his decision, saying that Purser is presently a danger to the public.

District Attorney Craig Ladd says there were many things that factored into that decision.

"It's a very comprehensive evaluation of his mental health history, his history of being non compliant with taking his medications, his history of how he reacts when he's not medicated. Those are the things they base their opinion on."

Ladd says he believes Purser will be sent to the Vinita Oklahoma Forensic Center where he will continue to undergo treatment and be closely monitored.

It is a secure facility.

Ladd says he's in agreement with the judges decision and thinks they took the right action in regards to pursers current state.