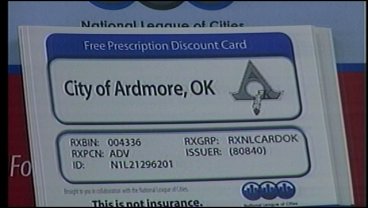 ARDMORE, OK- We told you last year about the new prescription drug discount card in Ardmore. Meredith Saldana looked at the numbers and has information on just how much the card has actually helped Ardmore area residents in the last year.

The cards are free to the public.

The city adopted the discount drug card from a nationwide program.

This year alone the card has been used in Ardmore for more than 3,000 prescriptions.

And the cards aren't just for people who don't have insurance.

City Manager JD Spohn says, "If your insurance won't pay for medication then you can use the card to discount the prescription and the same way with medicare. So if you don't have a program that covers your prescriptions you definitely want to take advantage of this program."

Reed Family Pharmacy in Ardmore says the card has helped quite a few of their customers.

"When people are sitting there saying I'm just gonna have to not use- take my medication this has actually been able to help. So that they can get the medication they need when they need it," says Rebecca Reed. "They're just thankful that this is available for them."

Only 1,500 people have taken advantage of the cards and already this year more than $55,000  have been saved with an average of about $15 saved on each prescription.

Spohn says they hope more residents will take advantage of the program.

"These are free. They just pick up the card here at the city hall or at the fire station or any of the pharmacies that participate and you can use it."