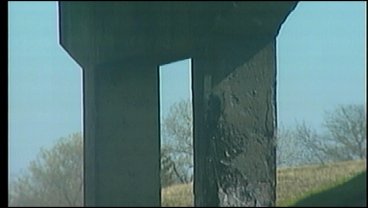 COLBERT, OKLAHOMA--The River Road Bridge is deemed structurally sound after Wednesday's accident.  Oklahoma officials conducted two surveys, using local engineers and engineers from OKlahoma, to make sure the reports both came back the same.  The facts matched up and the bridge is considered structurally sound.

Authorities say the smoke from the accident looked worse than the actual damage done.  Trooper Nabors looked into the bridges renovations and says the actual bridge was not damaged from the semi truck.  "It wasn't injured in anyway.  The concrete surface is okay, there wasn't any stress fractures; no structure damage.  Cosmetically it doesn't look good but structurally it is sound."

Nabors says Oklahoma officials are working to clean up the bridges appearance.  Nabors also adds, "even though the flames and soot covered the bridge, it looks worse than it actually is.  The flames did not get underneath the bridge due to the winds so it was not severely damaged by the heat or flames."

Oklahoma officials have extended the River Road Bridge's guardrail to prevent further damage to the bridge and cars.

Although reports say otherwise, Troopers are wondering if the Oklahoma State line is the reason for the multiple accidents at the base of the bridge.  "It could be an issue here at this bridge.  It's only about 3/4's of a mile into Oklahoma from Texas.  It's a pivotal point where drivers are logging their location and miles at that time," says Nabors.  Only one accident at the bridge reported a few years back is to have occurred this way.  (Reports say Wednesday's accident was due to mechanical problems as reported by the driver).