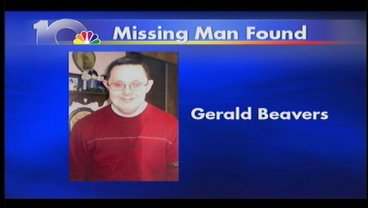 ARDMORE, OK- Wednesday night an Ardmore family was finally able to breath a sigh of relief because 51 year old Gerald Beavers was finally home safe.  But for several hours Wednesday, his family had no idea where he was.  Meredith Saldana has more on this story.

Gerald suffers from down syndrome and now the early signs of Alzheimer's.

Wednesday afternoon, the City of Ardmore enacted what's called a "Silver Alert" -- much like an Amber Alert -- but for adults who disappear.

And in this case, thanks to an alert citizen, this story has a happy ending.

It was a scary situation for the Beavers family when their son, Gerald, was no where to be found.

His mother talks about the fear she felt, "We prayed.  Jerry wasn't able to drive hardly but he finally got out.  He couldn't take it anymore and he got out there, too, and looked.  I just prayed to God and carried (Gerald's) bible around with me."

They called police and the search began.

Their biggest fear, was that he might have wandered all the way to the interstate.

"You don't think about it until it's you that it happens to," says his father Jerry.

The City of Ardmore activated their mass communication system CTY and sent a city wide automated messaged alerting everyone that Beavers was missing.

City Manager JD Spohn says, "It's a mass notification system, and it can call every phone number in Ardmore in less than 5 minutes."

When the call went out Mr. Beavers was walking in the 1600 block of Stanley.  His family says they're thankful that a woman who lives on the corner, received the call, looked out her window and spotted Beavers.

Gerald's mother says, "She was so sweet, she gave him a bottle of water and comforted him and kept him there until the policeman arrived and we sure were glad to see him when he drove up."

Spohn says situations like this, make the system worth every penny.