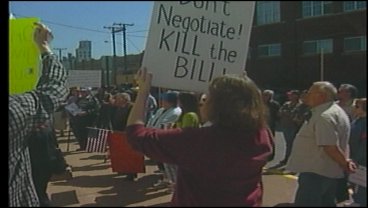 SHERMAN, TX --Debate over the health care bill brought large crowds to downtown Sherman Thursday. A local group organized a "Kill the Bill" rally at the Federal Courthouse, and across the street another group gathered in support of the legislation. Deeda Payton reports on how it all played out.

Signs were held high, heads nodded and crowds gathered. "I just wanted my voice to be heard," said Jackie McAninch.

That was the scene outside the federal courthouse as a "Kill The Bill" rally rang through downtown Sherman. "We want to let them know that how we as Americans feel that we are not for massive health care bill that they're proposing," said Kaaren Teuber.

There were not just protestors. Across the street, a smaller group gathered together in support of the proposed health care reform. "I have no problems at all with this bill and I agree with everything President Obama is doing and moving this nation forward," said Ron Peters.

Although their opinions differed, their passion was the same. "I think it's great. I know we yell a lot and we're very passionate on both sides about this and I do respect the other side," said J.R. Carr.

It was forty minutes of democracy at work which is exactly what the groups hoped for, to be seen, to be heard.