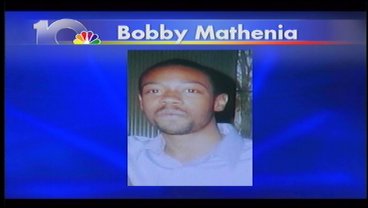 SHERMAN, TX - A Sherman family is coping with the loss of their loved one who was found murdered on Monday. The body of Bobby Mathenia, 27, of Sherman was found abandoned in a pasture in West Grayson County. As KTEN's Katy Blakey explains, his family is now trying to look past his death but finding it tough with so many questions left unanswered.

"I'm going to miss everything about him," said Evelyn Stone, the mother of Bobby Mathenia. "I can't put it in words."

Putting their grief into words is hard for Bobby Mathenia's family, but the tears come easy.

"I'm going to miss my brother," said Bobby's older brother Johnnie. "I loved him so much."

A son, a brother, a life cut too short.

"What happened to him - it shouldn't have happened like that," said Antonio, another brother. "He didn't deserve to die like that."

"It doesn't matter how it happened," said Bobby's mother. "It should have never happened. My son should be with his family today."

Instead, his family is making funeral arrangements, while two men sit in jail charged with Bobby's murder. Chris Blythe and Dustin Mullins were formally charged Tuesday afternoon. Bobby's mother says she wants them to know her pain.

"Why? Why did you take my son's life? Why? Would you want somebody to take your life?"

While there are more questions than answers the Mathenias are focusing on faith and family. Clutching onto the few tear-stained pictures left behind.

"When another family is taken away - it hurts. You have memories but the memories can never bring that person back - never."

The family and authorities are not yet speculating on why or how this murder happened. No motive has been released.

Meanwhile, funeral arrangements are set for Saturday, March 20th at the Harmony Baptist Church in Sherman. Services begin at 1 p.m.