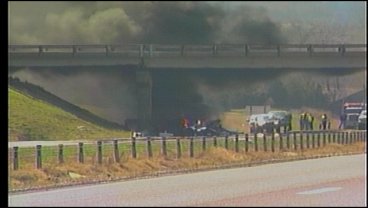 COLBERT, OK-- A semi driver is lucky to be alive. Troopers say he lost control and crashed into a bridge pillar which caused his 18 wheeler to burst into flames. Deeda Payton reported live from the scene.

Troopers aren't releasing the driver's name, but say he is from Texas, however, not the Texoma area. He escaped the crash just as the 18 wheeler caught fire. The driver was taken to the Texoma Medical Center, but was treated and released shortly thereafter.

After the crash, troopers say the man told them he lost control, slammed into the guardrail and crashed into the pillar of the River Road Bridge just north of the Red River in Colbert. They say he was hauling aluminum car parts which melted when the truck caught fire.

The crash caused significant damage to the bridge. The Oklahoma Department of Transportation is expected to access the damage Thursday morning and determine whether the bridge should reopen. We will follow up on this story.