Woman is Arrested For Violating Probation on Negligent Homicide Charge 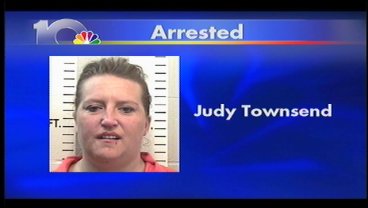 ARDMORE,  OK- It's a story to get anyone's attention. Raising questions about our justice system and consequences of driving under the influence. Judy Townsend is in jail for a second time in a little over a year's time. Meredith Saldana has more on this story.

Officers say Townsend's accused of driving under the influence of Methadone.

The first time it happened, prosecutors say, she killed someone.

This past Sunday, Townsend was picked up again.

Judy Townsend is currently on probation for negligent homicide stemming from a wreck that happened last year.

Now, friends and family of the victim say they're upset that Townsend continues to violate her probation.

On December 11th, 2008, police found Townsend to be speeding.

But toxicology reports weren't strong enough for the district attorney's office to prosecute her for driving under the influence.

Shirley Campbell was driving the car that Townsend hit.

She died in route to the hospital; Townsend received a misdemeanor charge of negligent homicide with a fine and 1 year of probation.

The victim's daughter, Tina Fisher, says she's outraged, "My mother's death was a misdemeanor which I had a really hard time excepting. But I just want there to be some consequence to what she did. Our family will never be the same."

The victim's friend Florine Rodgers agrees, "She killed my friend. That's manslaughter anyway you look at it. How she got out of it I'll never know."

Shirley Campbell was driving on North Glen when she was struck by Judy Townsend.

Campbell's daughter works right around the corner and says she vividly remembers hearing the sirens but had no idea paramedics were responding to the accident that claimed the life of her own mother.

"She had children, and great grandchildren, you know, that will never know her, and it just makes me furious that my mother's life meant no more to the legal system than that."

Florine Rodgers was in the car with Campbell last year when they were hit by Townsend.

"I'm just not me anymore. I can't get out and go and do things like I used to," says Rodgers.

Now family and friends are hoping Townsend will be taken off the streets.

"I hope they put her away. I don't think she should be out on the streets," says Rodgers.

"I'm hoping that this time something will be done. You know luckily no one was injured in this because the consequences are just horrible," says Fisher.

The district attorney's office says they plan to prosecute Townsend to the fullest extent.

But say that the maximum sentence she could receive would be one year in jail for violating probation, and one year for her DUI.