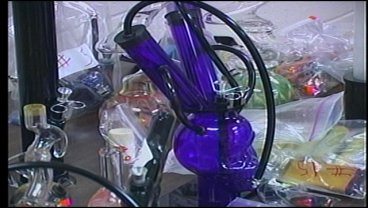 ARDMORE, OK- The drug related arrest of a business owner is upgraded to a felony and is stirring up things in Ardmore. People across the city had different opinions on the controversial subject. Meredith Saldana has more.

Friday afternoon, the owner of the Counter Culture Society store on Washington Street, in Ardmore, was arrested for possession of marijuana and distribution of drug paraphernalia.

It's been causing quite the buzz around town.

Ardmore resident Derek Logan says, "I can't understand why they're still busting people at 2010 over marijuana."

Henry Marris says, "I think they need to bust everyone they can."

Linda Lemley works next door and says, "I'm here most of the time he's here. Never once have I seen anything illegal going on here; never once had I smelled anything out of the ordinary."

During the undercover operation, deputies and the district attorney's office say Gurule knowingly sold items to a customer who was purchasing an item specifically for marijuana.

Assistant District Attorney Brad Noland says, "We have some admissions on the part of this owner that that's in fact what they were being used for. And that's part of the reason for the charges today."

Head shops, like Counter Culture here in Ardmore, are popular in our area, and law enforcement says they are legal as long as the items being sold are intended for the use of tobacco and not marijuana.

Lemley says she disagrees with the reputation that follows head shops.

"I don't use and I went in there. And I've bought jewelry for my grandchild, I've bought T-shirts from him, I've bought little ornaments that had nothing to do with marijuana or any kind of drugs."

Some believe marijuana shouldn't be punishable with a felony.

"Crack all that other crap that's not natural, I mean it's a plant, like that tree over there, it's a plant," says Logan.

While others believe he may have been a good person, they say what he was doing was wrong.

Marris says, "I'd say he's probably a good business owner, but been promoting the wrong kind of business especially for the trade that's going on around town."

Gurule is set to reappear in court on April 27th.