A Third Person is Arrested for Murder in Johnston County - KTEN.com - Texoma news, weather and sports

A Third Person is Arrested for Murder in Johnston County 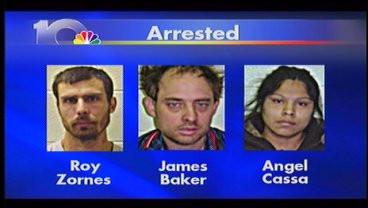 JOHNSTON COUNTY, OK -- It was a house fire one week ago. Now, three people are in custody facing charges of murder and rape in the death of a Murray State College Professor. Deeda Payton reports on new developments in a case that's shocked the tiny close knit community of Tishomingo, Oklahoma.

Sheriff Tom Winkler says all three suspects knew 61-year-old Jane Ann Bullard. In fact, he says one of the men was actually one of Bullard's foster children when she used to work for the Department of Human Services. He says the three went to Bullard's home for gas money last week and when they were denied, the situation worsened.

23-year-old Roy Zornes, 41-year-old James Baker and 19-year-old Angel Cassa are suspects. Not only are they charged with Bullard's death, but also rape, burglary and arson. Sheriff Winkler says they stole vases and a necklace with Bullard's grandchildren's birthstones on it.

Sheriff Winkler says a tip led them to the third arrest and he believes their investigation has been a successful, although, it is ongoing. "I think it's going well so far. We're not finished, but I think it's going well at this point. We have three people in custody right now and expect charges to be filed on all of them Monday," said Winkler.

The sheriff says all three suspects have been denied bond and are currently in the Johnston County Jail.