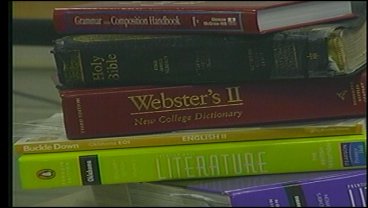 A bill in Oklahoma could put the Bible back into the classroom.  It's a proposal to allow students to study the Bible from a historical standpoint.

The bill's author Oklahoma State Representative Todd Russ says bottom line, "Our nation was founded on Christian principles and if we don't teach them to our children now in a few generations America's values will be lost in history."

By months end, a Bible could be sitting on your child's desk.  The bill hopes to allow students to use the Bible as a reference to look back into our nation's history and many Oklahoma parents agree. "I think if God were back in schools, it'd be a better place around here", says Brandy Jones of Colbert, Oklahoma.  Brian Cummins, a father with kids in public school adds, "I think that would be awesome, because I think that's what's wrong with schools today.  They are taking Christianity our of the schools."

That's why State Representative Todd Russ says he's pushing a bill to put the Bible back into your child's classroom.  "If we don't teach our kids the fundamental values of what this nation was founded upon in future generations they will most likely lose it or not care."

But for educators, it's not just an issue of whether to allow the Bible in school, but more how to do it without offending others.  That's why the bill clearly states it would be used as an elective.

If the bill does pass, the final decision would ultimately be up to the schools to decide if this elective fits into their curriculum.  Jay McAdams, Superintendent of Kingston Public Schools says before incorporating the elective, "we would first survey the students and community to see if that is something we could teach."  Many Oklahoma parents say they'd let their kids sign up.

It's a controversial topic that could be passed and soon be an class option for Oklahoma students.  "If it's a historical standpoint, I don't know how it would be a problem.  We already teach in our science classes different theories of how we came about," says McAdams.

We'll keep you updated on if the bill passes.