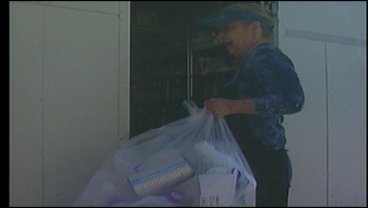 DENISON, TX -- A Denison business owner is going a long way to go green, she's going to Gainesville every other week to recycle because Denison's facility isn't set up for businesses to drop off their paper and plastic. Deeda Payton went around to find out why.

Paper, plastic, cardboard, oh my. That's the kind of materials local coffee shop, Country Java, runs through every week to make their coffee. "This one little businesses does a full pickup load once a week in recyclables," said Owner, Tamra Mease.

"Up until a year ago, we were just dumping it in the dumpster and the dumpster was overflowing so I decided to recycle my cardboard, my plastic, my tin," said Mease. Only, Denison doesn't accept recyclables from businesses, only residents. "This was kind of a trial to see if the people in Denison would do it and they responded so I expect commercial to come," said Zip Tarver with Denison Public Works.

That's why Mease goes all the way to Gainesville to go green. "It's just I drive 35 miles one way to recycle and it's really a shame that we can't do it here in Denison." However, she says she is glad there is some sort of recycling program in town.

Denison workers say their program has been very popular. About 50 people come through the transfer station every day to recycle, which they consider a success. "Mainly it'll affect the landfill. It'll take a while to make an effect, but if we keep the paper and plastic and enough stuff out of the landfill then our landfill won't fill up as fast," said Tarver.

Denison is making strides to help the environment, but businesses like Country Java will have to keep going the distance if they want to make difference, at least for now.

Denison Public Works says they do hope to get a permit in the future that would allow them to collect commercial recyclables, but it'll depend on the public's response.