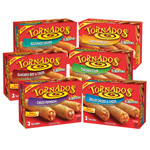 A massive food recall continues to grow in scope, and the effects can be felt at one Denison industry.

The recall of products containing a potentially salmonella-tainted flavoring ingredient ballooned this week.

More than 1.7 million pounds of ready-to-eat beef taquito and chicken quesadilla products from Houston are been taken off shelves.

And Ruiz Foods of Denison also recalled nearly 116,000 pounds of Tornado Ranchero Beef & Cheese roll-ups, frozen food you may have purchased at any local grocery store.

An inspection report released by the government's Food and Drug Administration this week said the Tennessee company "Basic Food Flavors" knew its plant and product were contaminated with salmonella as early as Jan. 21st.