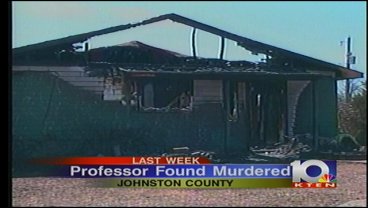 TISHOMINGO, OK - Two men have been taken into custody in connection with the murder of a Tishomingo woman. It's a crime that has rocked the small Johnston County Community. Katy Blakey explains how folks are reacting to these latest developments.

It's unpleasant talk, but it's all that many can think about in the small town of Tishomingo.

On Friday the body of 60-year-old Jane Bullard was found inside her charred home on Rock Creek Road. Most neighbors initially assumed Bullard had died in an accidental fire, but authorities later determined she was murdered.

"I was terrified. For someone to do that. It was just awful."

The murder of this grandmother and educator has put neighbors and residents on edge - uneasy and fearful in their tight-knit community.

The Johnston County Sheriff is still questioning the two people who have been taken into custody. So far, no one is facing any formal charges related to Bullard's murder.