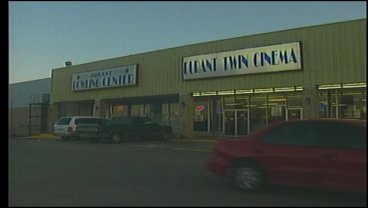 DURANT, OK - Plans to build a multi-million dollar movie theatre in Durant are now on hold. City leaders say it's just a matter of time until the plans are finalized, but one business says not so fast. KTEN's Katy Blakey explains.

For 17 years it's been a place to take a first date, catch a matinee or see your favorite stars. But for Rene Lemon and her co-workers, the Durant Twin Cinema is more than just a theatre. It's home.

"I've worked here for 9 years," said Rene Lemon. "I've bowled here for 11 years. My kids have grown up here. They absolutely love it, and what are we going to do now?"

Plans to build a brand new eight-screen, stadium-style theatre is threatening their home and their livelihood.

The new movie company, B&B Theatre, is asking for over $500,000 in loans from the Durant Industrial Authority to get started. A figure that is outrageous to Lemon.

The issue came before city council members Monday night. Only one council member, Tom Marcum, questioned the deal - asking why a for-profit entertainment business, who plans to employ only around 25 to 30 people would get such a large incentive agreement.

So approval of the incentive deal was tabled until city leaders can re-visit it. As for the Durant Twin Cinema, workers say the show will go on.

"We're going to fight as hard as we can. We're not closing."

The Mayor told KTEN he is confident negotiations with the B&B Theatre will continue. If a deal is reached, that new theatre could be open by the holiday season.