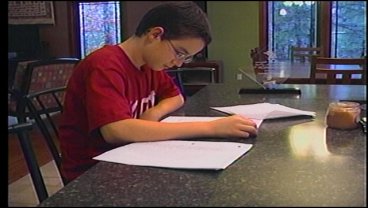 TISHOMINGO, OK- An 8th grader from right here in Texoma is the state of Oklahoma's spelling bee champion! Maybe you know him? Meredith Saldana has more on this story.

It's an exciting honor for Texoma!

The 13-year old champ is from Tishomingo, Oklahoma and is now going on to the National Spelling Bee in Washington DC.

For most of us, last Saturday was just like any other.

But for Nathan, it was a Saturday he'll never forget.

He was in Norman, Oklahoma, competing against the best spellers in the state.

"One of the hardest things about competing is the nerves of seeing everyone out there and knowing that if you mess up its all over," says Wakefield.

After getting over the nerves, the road to winning the state spelling bee was no easy task.

"First I had to be in the top 5 in my grade, and then the top five from each grade in our school competed. And I won the school bee and then went to regional and won it and then I went to state and won it."

About 25,000 students state-wide were hoping to make the top 40 spots to compete in Norman over the weekend.

Wakefield out-spelled them all, for the ultimate spot.

"It's gotten a little easier, but then again if I make it a bit further, then I'll be watched by the entire nation."

His shot at stardom is only a couple months away.

On May 31st he will compete at the National Spelling Bee in Washington DC.

For now, Wakefield says he'll be busy studying for his big chance.

"My goal is to get as far in nationals as I can. Hopefully get onto national TV and have a good time."

We wish him the best of luck and of course we'll let you know how Nathan does in the National Spelling Bee.