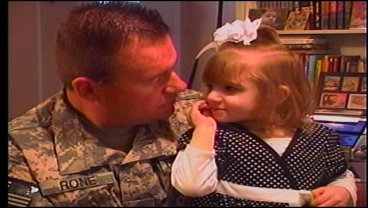 WILSON, OK- It's hard for military families to say goodbye to their soldiers when they deploy overseas, but it's so exciting when those men and women return home. Especially, when home is right here in Texoma. Ardmore's own 910th Quarter Master Company returned home Sunday and Meredith Saldana spent some time with one of those local heroes and his family. She has more on this story.

On a rainy day like this, the returning soldiers found themselves inside, spending quality time catching up with their families.

Despite the rain, it was a beautiful day for army Specialist Timothy Rone who spent his first day home from Iraq with his family.

He was overseas on his first deployment for a little less than a year, but missed so much.

"I missed my sons birth, he was born in August," says Rone. "And I got to see him on leave for a couple of weeks but it wasn't quite the same."

His wife, Jamie Rone says, "It's really hard with them being gone and stuff they really miss so much."

Jamie couldn't wait for him to get home, Sunday, but the weather wasn't cooperating.

She said the hours of waiting seemed like an eternity.

Specialist Rone finally walked into his home at midnight, Sunday.

"Very exciting, tearful. I was so happy I cried," says Jamie.

Thanks to technology, from Iraq, Specialist Rone was able to keep in touch with his family in Wilson, Oklahoma.

"We had Internet access and phone DSL phones so yeah we got to talk quite a bit," says Spc. Rone.

His wife, Jamie, agrees, "Lots of pictures, I mailed him pictures and home videos that's a big thing, too."

But sometimes, it was the little voice on the other end of the line that made him miss home the most.

"On the phone, she would always say, come home and have a sandwich, daddy. Always, every time I talked to her, " says Spc. Rone.

He isn't sure when he'll be deployed again, but as for the near future, he plans on making up for lost time.

"Just getting to know them again really and getting back into the swing of things."

Specialist Rone says he plans to take the next month off work and spend that time with his family.