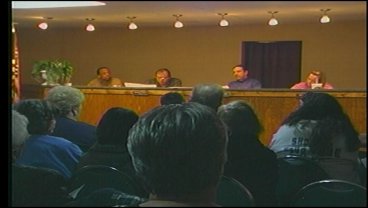 ACHILLE, OK - Dozens of residents turned out at Monday's Achille City Council Meeting. Many were hoping to get answers from city leaders about concerns they have within the community, but that didn't happen. Katy Blakey has more.

It was a heated, but short meeting inside Achille City Hall. Dozens of people turned out, but as soon as the first resident stood up to address complaints, councilors walked out of the meeting.

Many of those in attendance say things are being mishandled by the city council and place most of the blame on Achille's Mayor, Lynn Chambers. Residents believe councilors are mishandling the city's books, intimidating city employees or citizens who disagree with them and hiring relatives of councilors to do city work.

Charlene Vail got up to speak at Monday's meeting, when councilors walked out. She hopes her efforts will force change on the city council, and perhaps lead to electing a new council.

"[Let's] help these people change it, help them take their town back," said Vail. "These people are suppose to be in control of this council and this town."

"What we need to do is get this whole council off of here," said Dean Collins, another concerned resident. "This town is pretty broken right now."

One city council member, Kenneth Edwards, did return to the informal meeting to listen to residents, but said the council could not address complaints because they were not on the agenda.

"We're going to do our best to find out what's going on and try to find a path that will better this town," said Edwards. "I'm going to do my best."

Mayor Lynn Chambers says he invites anyone to make an appointment with him to address their concerns, adding the council has nothing to hide.

Some residents say they begin to circulate a petition, asking to have the Mayor and possibly city council members removed from office, in the hopes of electing a new board.