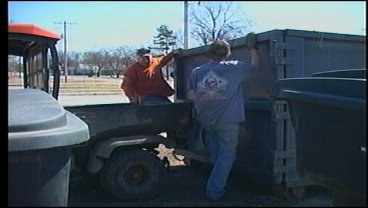 WAPANUCKA, OK- It's been more than a month since trash has been picked up in the city of Wapanucka. Residents tell us they have paid their bills but city hall hasn't done their part. Meredith Saldana was in Wapanucka and has more on this story.

Residents are upset and say they want answers.

City hall declined to go on camera but says their attorney will address the issue, Monday night.

Since February first, trash collectors stopped collecting the trash outside homes and businesses in Wapanucka.

And residents say, more than a month later, they still don't know exactly what's going on.

Jimmy Ray says this isn't the first time they've had issues, "Twice this has happened with this company and the one before."

Business owner Kelli Hilburn says her trashed piled up in the back of her cafe.

"Oh it's real bad. It was real bad, we had trash piled up in the back room and I knew that if something wasn't done that the health man would be on me," says Hilburn.

But Thursday, Hilburn was contacted by Waste Connections.

She says they offered to help her out as a business owner and she didn't hesitate to sign the contract.

For many Wapanucka residents over flowing trash cans have become a site all too familiar.

Now they tell me they want answers from city hall and their trash picked up.

"We got little trash things on our porch outside and nobody come to pick them up," says Ray.

Resident Jeremy Scott says, "For a while now, we've had to bring trash up here. They say they didn't pay their bill up there. I don't know nothing else that's the only thing I heard, just hear say."

City hall now has signs posted on their windows.

Announcing a meeting with their attorney, Monday night, at 6 PM.

And residents are hoping to get some answers.

"It's a sad deal especially the older people. You know I'm here everyday and see these people coming up there trying to throw that trash in those big roll offs and you can't do it," says Hilburn.

"They ought to pay the bill and get the people's trash picked up," says Ray.