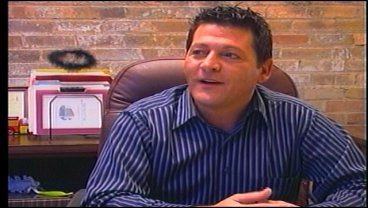 Ardmore's Main Street has come a long way in the last few years and business owners tell me, much of that, is thanks to the Main Street director.

James Lamey is Ardmore's Main Street Director and he's no stranger to most people in Texoma.

Jadean Fackrell, the owner of the Wine Depot, says, "He has really created a lot of wonderful, positive things going on here in Ardmore and we're blessed to have him."

Not only do Main Street business owners think he's good at what he does, so does the state of Oklahoma.

Lamey is in the running as the best Main Street Program Director in the state.

"I am very excited that he has been nominated because he richly deserves it," says Fackrell.

Lamey has been narrowed down to the top 3 program directors and while he's extremely modest about his nomination, he is very proud of Main Street.

Lamey came to Ardmore 2 and a half years ago and says since he's been here, he's most proud of the beautification of downtown and new business.

"We've been very successful in business recruitment. We have 12 new businesses just within the past 8 months downtown," says Lamey. "And in this economic climate that is pretty phenomenal."

Business owners on Main Street tell me they're excited James Lamey has been nominated, but they also say they're not surprised.

Stacy Cavallo, owner of Paws 4 Fun in Ardmore says, "I think that just the personality of the people that he's brought together and the activities, that he is constantly doing something and things are going on and you want to be a part of it because of him."

Steve Middleton owns Dacapo Music and says, "He's just willing, I think that more than anything, whatever it is, he's willing to step up and take a swing at it."

What makes Lamey proud, is the recognition of Ardmore's Main Street statewide.

"Being able to go out in other communities or anywhere in Oklahoma and talking about this community and they're like Ardmore has that? You guys have that downtown? And it's a great feeling to say, yeah, we're doing pretty good," says Lamey.

The announcement of Oklahoma's top Main Street Program Director will be March 30th.