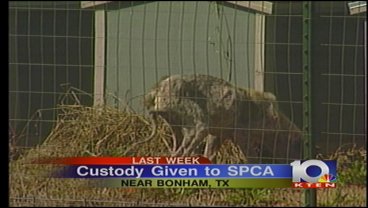 FANNIN COUNTY, TX -- We have an update on an animal cruelty case out of Fannin County. The SPCA has retained custody of all 64 animals they seized in an agreement with the woman accused. Deeda Payton was in Bonham where Brenda Neely was in court Thursday.

Sixty four animals of all kinds were found starving and neglected on Brenda Neely's property last week near Bonham. The registered rescue, Neely's Pet Place, was raided by the SPCA who found twenty more animals dead during their animal seizure. "The thing that sticks out about this case is that this was a non-profit, rescue group so there's even higher standards as far as I'm concerned on how those animals are cared for," said Ann Barnes of the SPCA.

Many people in the community trusted the Neely name, bringing her homeless pets, and relying on the rescue to find them good homes, only to be disappointed later they say. "I believe in the beginning she probably did start with good intentions but that didn't last long," said Lisa Palevo. "She did have financial support and took advantage of that," said Michele Crouse.

Thursday was Neely's scheduled custody hearing for the animals seized by the SPCA. The courtroom was full when the SPCA stood up and announced that they had reached an agreement with Brenda Neely and would retain control of all the animal seized but Neely never admitted any wrong doing.

"When you look at a sick dog, you gotta remember how it came into the shelter before you say she's not taking care of the animals." Neely's Attorney, Bob Jarvis, says Thursday's appearance was the first step in a long legal process. Thursday was about custody. The next time will be regarding criminal charges, but he believes that's where the truth behind these images will finally come out.

All of the animal seized are at the SPCA Shelter in McKinney getting treated and rehabilitated so they can one day be put up for adoption. If you are interested in learning more about the animals, visit www.spca.org.