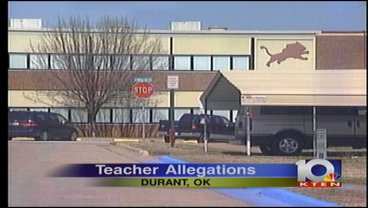 A parent came forward Monday night at a Durant School Board meeting and accused a high school teacher of kissing her 17-year-old daughter on school grounds. The parent was also concerned that school administrators might not be doing enough to protect their students who report inappropriate behavior.

Superintendent Jason Simeroth would not comment on the personnel issue, but did respond to the comments about how the school handles these allegations. "We take the safety and security of our students to the highest degree. That's our number one priority. We look into anything we hear, any parent that comes forward, we look into anything they have and we judge it on it's merit. Any action we take, regardless of the issue, has to remain confidential by law," said Simeroth.

Durant Schools' Attorney, Bryan Drummond, says the school district is aware of the allegations, and the district conducted a thorough investigation.