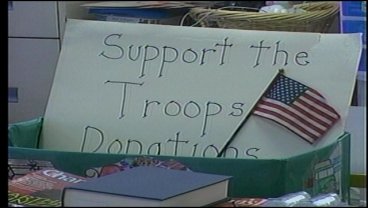 ARDMORE, OK- It's a story of kids giving back. An Ardmore daycare has been collecting items to send to troops overseas. Meredith Saldana has more on this neat story.

The kids have been putting together the care packages since December and they were excited to see just how much they collected.

The kids range in age from 4-years-old to 11-years-old.

And with several of the kids having parents in the military, the Gloria Ainsworth Day Care thought care packages, filled with every day items, would be a fun project for the children to take part in.

Army Reserve, Pam Nelson says, "Makes me feel good that the children are getting involved and staying abreast of everything that's going on with our soldiers, and keeping them in their thoughts.  This is awesome, because this is stuff that could really be used. It's very much appreciated by the troops."

There were several military men and women there to say thank you to the children.

They praised them for all the hard work and effort they put into making the troops feel special.

And say they hope it wasn't only fun, but also a learning experience for the kids.

"I hope that they know the patriotism, just knowing that they are helping the soldiers, who are away from their homes and far away. And they will appreciate what they've done as far as making sure they have the little packages for them," says Nelson.

The Gloria Ainsworth Day Care says the project went so well, they plan on doing more packages to send to the troops.