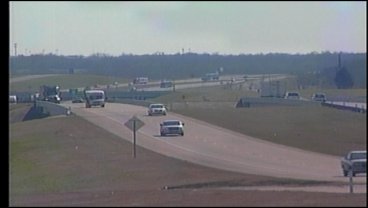 In just the past seven days, authorities have seized about 80-pounds of pot from routine traffic stops on highway 69/75. "It's a main thoroughfare that's easily traveled by dopers," said Sgt. Bruce Dawsey of the Sherman Police Department.

Drug busts are not unusual for the highway, and authorities say marijuana is typically the easiest to find in a vehicle. "When they roll down the window if it's in the car, you can smell that's pretty much done then," said Lt. Jay Whitney of the Grayson County Sheriff's Office.

"It's nice to see that they pull a significant amount of weed off the streets, but it's not an usual amount," said Sgt. Dawsey. What is unusual, is that all of the drug busts made on the highway recently have been for marijuana, not crack cocaine or any other drug. Local authorities attribute this consistency to the heavy pot trade coming in from Mexico, that they say seems to be increasing.

The Grayson County Sheriff's Office says more marijuana has been seized in 2010 than in the last four years that the state has been keeping records, and it's only March.