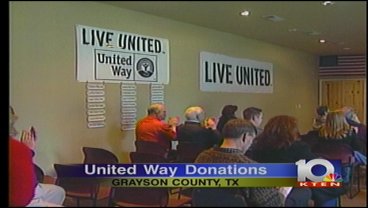 GRAYSON COUNTY, TX --The United Way of Grayson County has something to smile about. Wednesday, they announced that they have raised more than one million dollars for their local programs. Deeda Payton attended the press conference where they broke the big news.

The local United Way provides services for thousands of Texoma residents. Just about any organization you can think of is supported financially by the United Way: The Red Cross, Salvation Army, Crisis Center. Now, these organizations can breathe a little easier knowing their community has really stepped up to help.

The United Way held a press conference in Sherman to thank all of their supporters and celebrate the number of donations they have received in the last year. You may not know this, but the local United Way works with 22 agencies and provide cradle to grave services for thousands of Texoma residents. "If someone is faced with domestic violence, we have a program for that. If someone is faced with childcare issues, but wants to work we can work with them on that. If someone needs therapy we work with them to get them back to work. We just cover the entire spectrum," said United Way's David Cortinas.

United Way volunteers say they were worried about raising money in a recession, but they say local residents didn't let that stop them from giving to the organization that gives so much back to the community.