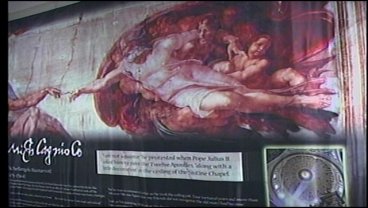 ARDMORE, OK- Some Ardmore students are getting a closer look at some world famous art, the work of Michelangelo. It's part of a traveling exhibit. Meredith Saldana has more on this story.

The exhibit is being displayed at the Ardmore Middle School and while it will only be there for a week, students say they're excited to learn all about Michelangelo and his work.

It features the Italian renaissance artist's paintings and sculptures and it's not only being taught in art class.

Art teacher Tina Verchelli says, "We have an activity pack that came with the program that's been distributed to all the teachers. There's information for the English teachers, geography, computers, so it's really cross curricular activity for all the students."

And the lesson continues in between classes, in the hallway.

Student Matthew Pickens says, "Well, I think all these people who pass by it will actually learn a little about Michelangelo and what he's done."

At first, students weren't quite sure what to think of the art, but are learning to appreciate it.

Darrien Lashbrook, a 7th grade student says, "Well at first, when I first saw it in the hall a lot of kids were pointing at it going, 'oh that looks weird.' Funny stuff like that, it looks pretty cool. People are getting used to it and actually watching it and looking at it."

Students say they've learned about Michelangelo and his work before, but it's been on computers and text books, where the pictures were small.

They tell me they much prefer to see it on a bigger scale.

"I'm surprised that he could actually make paintings this big," says Pickens.

Lashbrook adds, "It's easier to see the detail like little strands of hair and stuff like that."

And the middle school students plan on making the most of the art, while it's there.

"The best part about having it, is that you can look at it one time and the next time it won't be gone," says Lashbrook.  "Like if you're reading it from here and you have to go to the next class you can come back and keep reading it."

The traveling exhibit is paid for by a grant from the Ardmore City School's Enrichment foundation.