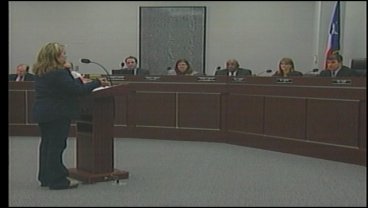 SHERMAN, TX - The big issue at Monday's Sherman City Council meeting concerned allowing an oil and gas company to drill inside the Sherman city limits, and close to homes along Shepherd Drive. Katy Blakey has more.

Residents living along Shepherd Drive say this is more than just a drilling company moving in to their backyard. It is a quality of life issue. Despite residents speaking out against the issue, councilors unanimously voted to allow the company to drill.

Penny Curtis has been an outspoken critic of the company drilling near her home. About half-a-dozen residents live near the proposed site, which is off Highway 75 and Shepherd Drive. All of them had opposed drilling in their neighborhood.

On Monday night Curtis spoke before the council, asking them again to consider the "unknowns" associated with the drilling, but in the end the council voted to move ahead, but with a few stipulations.

The company's permit was approved on the conditions the drilling site remains 500 feet away from adjoining neighbors homes, the company sets up a 24-hotline for complaints or concerns, and the company agreed to access the site from Highway 75 instead of using Shepherd Drive.

Despite the issue not going their way, Curtis says she is okay with this compromise.

"You know in a compromise you can't get everything you want, but you get what you get and be happy with that."

Residents say they still have some questions about the drilling site and process, but hope they can work with the company to address any other concerns that may come up in the future.