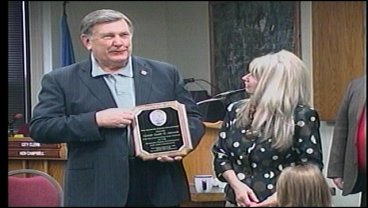 ARDMORE, OK- The city of Ardmore said goodbye to Interim Chief Gary Adams. They held a reception for him Monday at the city commission chambers.  Meredith Saldana sat down with him and has more on this story.

The turmoil at the Ardmore Police Department started back in August and eventually led to the resignation of Chief David Leonardo.

That's when Interim Chief Gary Adams was brought in to observe the situation and to try to salvage what was left of the department.

"Well, there was obviously a lot of concern, uncertainty, instability, was not sure what the future held," Adams says. "There was many trying to make decisions, whether to stay or go and some had left. There was just a lack of communication bottom line. An assurance that they where allowed to do their job and do it right."

Adams, who came out of retirement to help the Ardmore Police Department, says he first had to earn the police officer's trust.

"I told them I'm coming here not to look for fault or look for who's to blame, but to see how we can fix it together. If you will trust me, I'll trust you until you prove me wrong. They did and we hit it off."

More than a dozen people were hired in the few months Adams was chief.

"I did hire 15 different positions and they are on board. We have 5 that are still in the training process now, but they will soon be out on their own and we will get to see a lot more coverage," says Adams.

And his intentions weren't just to help the department.

The money earned from his time with the APD was given to his church.

"Well, it was for the intent of helping my church. It was known that we were running short on revenues coming in the church. It was an opportunity. I don't need it, my wife and I are retired and our retirement is very substantial and sufficient and that's what it was."

And after all he did for the Ardmore Police Department, he says the people of Ardmore, did even more for him.

"Thank you for touching us and we will never forget you and you will always have a special place in our hearts."