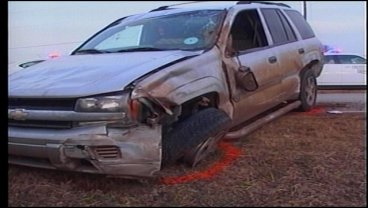 It was breaking news on KTEN News at 5. Now confirmation, a wreck near the Washita River Bridge in Carter County, did take one life.

It happened on Highway 177, on the northern edge of Dickson.

According to troopers, 48-year-old Kimberly Awalt of Madill, struck the railing of the Washita River Bridge, then lost control striking another vehicle.

Her SUV rolled, she wasn't wearing a seatbelt and was ejected.

She was later pronounced dead at Mercy Memorial Hospital in Ardmore.

The driver of the other car involved was not cited.