A Sneak Peek at the New Pontotoc County Detention Center 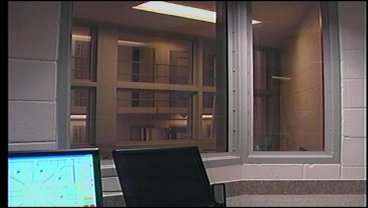 PONTOTOC COUNTY, OK- Pontotoc County's new jail is just about complete. It's been in the works for more than 2-years and Monday, we got an exclusive, sneak peek. Meredith Saldana visited the facility with the sheriff and has more on this story.

Sheriff John Christian says the biggest issue they have at the current jail is over crowding.

But in less than a month, he'll have plenty of room.

The current jail in Pontotoc County was built in the early 70's.

Today, nearly 40-years later, the finishing touches are being put on the new $8-million facility.

The new jail was built because of problems like over crowding at the current facility.

The current jail sleeps 42 people, the new facility will sleep 200, and has many upgrades like video visitation.

"On visitation days you usually have quite a few family members come to see them and you don't have that issue of bringing in a large number of people out of their cells and just for safety purposes," says Sheriff Christian.

And central computer stations run by jailers, can open jail cells with the click of a mouse.

They will also control things like lights, TV's and through one way glass, they can monitor all activity.

"We've already hired our new detention staff, about 15 extra is what we had to hire to run this facility," says Christian.

And with the new detention center more than quadrupling the amount of inmates that the old one houses, now is the time to take care of any outstanding warrants.

Christian says, "We have, I think, probably around 6000 warrants that's outstanding that we can't really go out and arrest those people and bring them to jail because we don't have space at this time. So, we'll be able to be a little big more active in that field."

Christian says funding for the jail was taken care of by local banks who came together and loaned the money for the bonds.

That money will be paid back through sales tax earnings.

The ribbon cutting will be held Friday, March 5th at 10 am.

The public is welcome to attend.