Stretch of Hwy 289 is Called Dangerous by Motorists 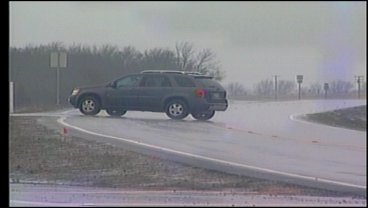 GRAYSON COUNTY, TX -- The highway 289 expansion has been open officially for about two weeks, and already there are complaints of a dangerous intersection. The intersection in question is just north of Pottsboro where highway 289 meets with the old 120 which is now called Spur 316. Deeda Payton reports on TXDOT's plans to improve the intersection.

TXDOT says they are well aware of the problems with that intersection. In fact, they say they had plans to re-design it even before they started building it because say they didn't have the money or the means to do it the right way the first time around.

Commissioner Gene Short calls it a temporary fix, but local residents who drive the road everyday call it dangerous. "There's no signage til you're right at the turn now, so these people going south going 55 mph have no idea you're getting ready to turn," said Jerome.

The turn is pretty easy to miss. While our cameras were rolling, an SUV headed south completely overshot the turn and had to back up in the highway to make it. Fortunately, there was a break in traffic at the time. "I guess we're just a an accident waiting to happen and it just shouldn't happen to anybody's family and I hope it doesn't happen to mine," said Jerome.

David Selman with TXDOT says they have plans to re-design the intersection, but don't have the money to complete the changes all at once, so they'll have to work in phases. They have a meeting scheduled at the end of this month to discuss the intersection.