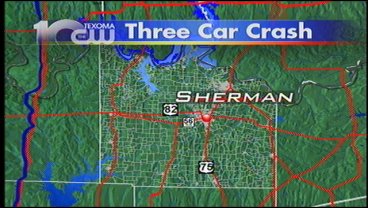 SHERMAN, TX - Two people were taken to the hospital after a major accident at FM 1417 and Highway 11 Sunday night.

Troopers with the Department of Public Safety say a pick-up truck turned in front of an oncoming car, carrying two people from Greenville, TX. The two people were taken to Texoma Medical Center with serious injuries, but their condition is not believed to be life-threatening.

The accident happened around 8 p.m. Sunday. The driver of the pick-up truck was written a ticket for failing to yield.

The FM 1417 and Highway 11 intersection has been the subject of major safety concerns from drivers. After several serious collisions in recent years, TxDot lowered the speed limit and installed more signs in October of 2009.