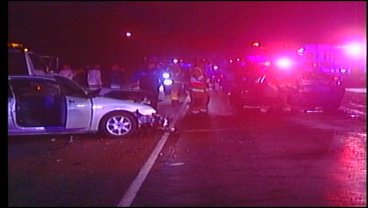 SHERMAN, TX - A major accident in Sherman sent two people to the hospital and tied up traffic.

The three-vehicle crash happened around 10 p.m. Friday on FM 1417 and Center Street. Police are not releasing the names of those involved, but say the two people injured did not suffer life-threatening injuries. One person was flown to a regional hospital as a precaution. The accident happened after one car rear-ended another and was pushed into on-coming traffic.