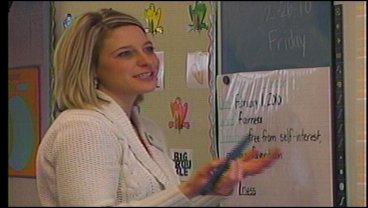 ARDMORE, OK- Early voting in the Plainview School District, in Ardmore, started Friday.  We've told you the district is asking parents to pass a bond for nearly one million dollars.  With the election being Tuesday, Meredith Saldana met with the superintendent to find out why they need this bond to pass.

The Carter County Election Board tells me they didn't have very many Plainview parents show up for early voting, Friday.

But the school district says it's been more than 20-years since a bond issue didn't pass in the Plainview district.

Superintendent Julie Altom says there are several reasons her school district needs this bond to pass.

She feels the most important item on the list, is replacing the heating and air units.

"They are 22 years old; life expectancy is 15 years. So, with the possible leakage of carbon monoxide that is big for us," says Altom. "Just for the safety of our students.'

The floor in the intermediate building is cracking and peeling; with the bond money, they would like to replace those floors.

If the bond does pass, part of the money will be going to the fence outside the primary school.

The superintendent tells me, with the fence only being  four feet high, it poses safety concerns.

"There's also a fear of if a passerby were to come up, lure a kid over, with a 4 foot fence they can literally reach over the fence and pick that child up," says Altom.

In December, some of the elementary classes received smart boards.

With the proposed bond they're hoping to buy more.

Altom says, "We're really trying to complete that component of technology for all classrooms within the district."

And good news for parents, this bond won't raise taxes.

"We have part of an old bond from 2006 that is rolling off and so if this bond were to pass then it simply keeps tax millage right at the same."

Early voting will continue on Monday, at the Carter County Election office from 8-6.

The election is Tuesday, you can vote from 7 am- 7pm at your normal precinct.