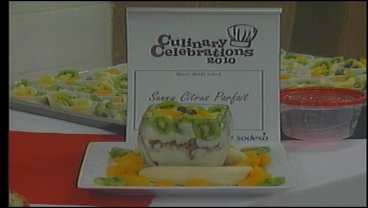 DURANT, OK -- Durant schools are promoting healthier eating habits by holding culinary competitions, and their students are eating it up! Deeda Payton was in the kitchen with four of the culinary competitors at Durant Middle School Friday.

A culinary competition turned kids into cooks at Durant Middle School. "We have one over there he's just crushing away," said Mark Woods.

They pounded chicken and sliced apples all in an effort to create a healthy meal their fellow classmates could also make and would eat again. "I wanted to prove that healthy food actually tastes good," said Justin Payne.

The competition got pretty heated. "We're having to cook the chicken and then he's got to build his sandwiches, we have a young man over there making sandwich squares. We have a salad being created behind us and they're all learning about food safety as well," said Child Nutrition Secretary, Julie Smith.

"I think it's really fun and exciting to make food like this," said Summer Simeroth.

The four competitors' dishes are judged on presentation and taste, but you can tell, these kids aren't new to the culinary arts. "I like making steaks and ribs and stuff like that," said Jared Woods.

These kid cooks may just be the catalyst to getting their classmates to continue to not only eat healthier, but to think healthier when they're in the kitchen