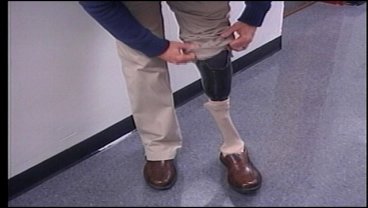 ARDMORE, OK- Health news that just a few years ago seemed like science fiction. The ability for the human brain to control prosthetic limbs as if they were real. The research for it, being done in Oklahoma. Meredith Saldana has more on this story.

The program is called brain-machine interfaces.

A technical term, that a doctor from OU, hopes will turn into life changing miracles.

And he's ready to share his research with folks in Texoma.

Through the study of the motor skills of monkeys, doctor Andrew Fagg, an associate professor at OU, was able to construct computer models for the advanced prosthetic devices.

Marilyn Roossinck, a researcher at The Noble Foundation, says they're excited for Dr. Fagg to come share his findings with Texoma.

"It's very, very cool. What they are able to do now is they are able to make artificial limbs, hands, feet, legs, whatever, and they can and are starting to be able to tie them into the central nervous system," says Roossinck.  "So you can actually operate them just like you would your normal hand or normal foot.  So by thinking about it, you can make the hand do whatever you want it to do."

He lost part of his leg to cancer ten years ago.

"There's so much room for improvement too, because basically, all it is you have no movement at the ankle," says Bloodworth. "It's just pretty much a hockey stick."

But with the prospect of this new technology, he too, could be back out  on the court.

"I think it would be awesome! I mean, just to imagine the possibilities. There's just so many things and right now we are somewhat limited to what we can do. You know, when you put a shoe on there's no movement in the ankle. So just simple things like putting a shoe on and then advancing into running," says Bloodworth.

Something that seemed so far in the future, is now closer to becoming a reality.

Roossinck says, "Some of us are old enough to remember TV shows like the Bionic Woman and that's coming to life now, that's happening right now."

If you'd like to learn more, the presentation will be Tuesday night.

It's a free, family friendly event, at 7 PM over at the Ardmore Convention Center.