The Story Behind the Woman Accused of Animal Cruelty - KTEN.com - Texoma news, weather and sports

The Story Behind the Woman Accused of Animal Cruelty 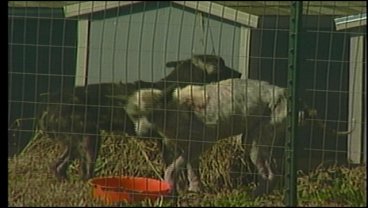 FANNIN COUNTY, TX -- When officials with Fannin County and the SPCA stepped in at Neely's Pet Place, they took 44 animals into custody and found twenty others already dead. The owner of the property, Brenda Neely, said she was running a rescue organization, but was arrested for animal cruelty. Deeda Payton reports.

Everyone I spoke to today was upset about the animal suffering that went on at Neely's Pet Place, but they also said Brenda Neely started her rescue with good intentions, but quickly ran out of resources. They say she should have asked for help.

Neely's Pet Place was more than a sad sight when the SPCA showed up. The skeletal images we aired of just the dogs alone had viewers sounding off about the owner, Brenda Neely, who was arrested on the property for animal cruelty. "I have been crying ever since. It was so heart-wrenching and I want to be there when they file charges at the courthouse cause I want to be there," said neighbor Shirley Clark.

But, those who know Neely say there is more to the story than what meets the eye. The number of dog houses, tarps, and shelters shows that Brenda Neely did care about the animals, but she had so many animals that she was overwhelmed. The SPCA says that can sometimes happen, and that people just need to know when to ask for help. She ran a self-proclaimed rescue and would even take in dogs and cats from the city pound that had been abandoned. She would try to adopt them out. "I think that we had a very well intentioned person sort of let things get away from her," said Bonham City Manager Corby Alexander.

"She is not the kind of person that would willingly allow something like this to happen. I'm sure she just got overwhelmed at some point," said Bonham Police Chief, Mike Bankston.

Still, many say there is no excuse and want to know why the animals weren't taken sooner. The SPCA says they warned Neely several times. "This is what aggravates me is that it's been over a few years now of complaining at the powers that be," said Clark.

According to the regional office of the SPCA, they respond to 4,000 reports of possible animal cruelty every year. They say so many start with animal lovers who just want to help but sadly turn into what they found Wednesday, too many animals and not enough resources to save them all.

A custody hearing for the seized animals will be held March 4th. We will, of course, follow up on this story.