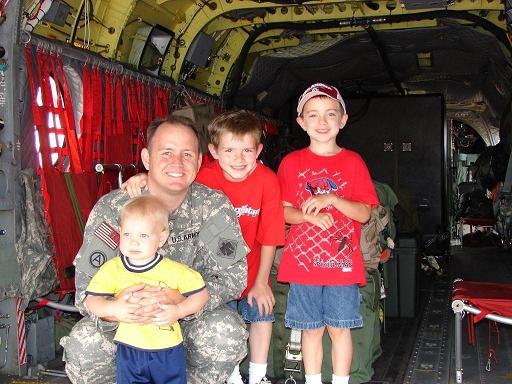 Chief Warrant Officer Brady Rudolf was more than just a man in uniform. His family calls him a hero, but also a comedian, a loving husband and father and a caring brother. His older brother has now made it his calling to keep the spirit of Brady alive for his three young songs.

C.W.O. Rudolf had secured retirement - serving 20 years in the Army. He could have come home, left the fighting in Iraq and returned to his family, but he stayed. He wanted to remain with his fellow soldiers, fighting for a cause he believed in.

His brother Dustin says that's just the type of guy he was.

After Brady's Chinook helicopter crashed, killing those on board, his brother promised to keep his memory and spirit alive, especially for the three young boys Brady left behind.

"That's something I vowed to do, so they'll never forget what a great dad he is."

That promise is being honored with the help of Senator Jay Paul Gumm. Soon, part of Highway 70 will become the "Chief Warrant Officer Brady Rudolf Memorial Highway."

"It will be bittersweet. It really will," said Dustin. "It's going to be neat for all three of my nephews to see it - Braden, Ty and Nate. [They'll] be able to see their dad's name on the highway and see it from now on and the rest of their lives, and so will other people from now on."

Dustin hopes drivers will take a moment to reflect.

Senate Bill 1713, naming portions of local roadways in honor of three local soldiers unanimously passed in the Senate on Monday. It now goes to the House for approval where Rep. Sam Buck is the sponsor.