Noble Foundation Plants Set to Lift Off on Discovery 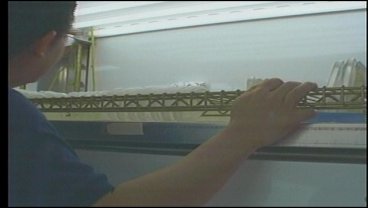 The Noble Foundation, in Ardmore, is known for their scientific research. Now, the organization is one of  three groups nationwide getting to send their plants to space.  Meredith Saldana met with the scientist behind this elite experiment and has more on his story.

Scientists at the Noble Foundation have been taking practice trips to the Kennedy Space Center.

All in preparation to see their plants, lift off on the Discovery space shuttle.

If all goes according to planned, in less than 2-months, petri-dishes of plants from the Noble Foundation, will be lifting off on the space shuttle.

It's an experiment that NASA chose Elison Blancaflor, a Noble Foundation scientist, to be a part of.

"It's really very exciting! Because we get this rare opportunity to be able to grow our experiment up into space shuttle," says Blancaflor.  "And it's something I never imagined that I'd have the opportunity to do."

The point of the experiment is to understand plant development, specifically, gravitropism.

The process, here on earth, of stems growing up and roots growing down.

A process dictated by gravity.

"In space, without the force of gravity, who knows how they'll grow," says Blancaflor. "But, typically, they probably will grow randomly."

Right now in Ardmore, Blancaflor and his team are mimicking the experiment  by using replica's of the petri dishes, with their plants, in a dark environment.

"The outcome may appear simple, but it may allow us to identify new players involved in how gravity affects pant growth and development."

Blancaflor and his team visited the Kennedy Space Center, last week, to prepare for this once in a life time experiment.

Because they only get one chance, they want to make sure everything goes according to planned.

"Although we're not sure about what to expect with the results, it's nonetheless exciting." says Blancaflor. "The experience of working with the NASA personnel at the Kennedy Space Center."

It's an experiment, that could give answers  to many unanswered questions, about life in space.

"Plants as we know produce oxygen, they can be a source of food and so this can provide a good environment if humans are to embark in the future on long term space missions," says Blancaflor. "So that's important to know because if we don't know how plants grow in space then there's still a lot to know."

The shuttle is scheduled for lift off Monday, April 5th at 6:27 am.