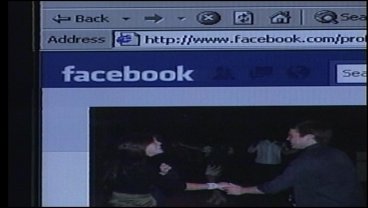 MARIETTA, OK- The Internet can be a convenient source for research, business, and learning.  But for sexual predators, it can be a quick, easy way into your home. Lawmakers in Oklahoma are now trying to ban anyone convicted of a sexual crime from having access to social networking sites.  Meredith Saldana reports.

The bill, aimed at sex offenders, just passed the Oklahoma House of Representatives and local lawmakers are hoping it eventually ends up on the governor's desk.

Facebook started in 2004 as a social networking site aimed towards college students.

Today, there are over 8-million users and many of them are teenage students.

Lauren Johnson of Marietta says, "I think the Internet's gotten a little- - I know there's freedom of speech and freedom of whatever you want to do, but I just think that it's opened too many doors for dangerous people."

Something local law enforcement agrees with.

"I do ask if they've had problems, and there's a high majority that says that they have had people harass them.  They have received photos they shouldn't have seen," says Chief Johnson.

Local resident, Davida Long agrees, "I don't think they should be allowed to get on there. There's too many young children on there, and there's too many opportunities for them to do the things they've done in the past."

In the KTEN viewing area alone, there are over 700 registered sex offenders who have access to your children through social networking sites like MySpace and Facebook.

"It does allow your predator to sit at home, in private and to have millions of possible victims and to spend hours just looking for a victim," adds Chief Johnson.

But some are wondering if this bill will actually deter sex offenders.

Long says, "It might cut down on it. I think they're gonna find a way to do these things anyway. But maybe it will cut down a little bit."

"I think parents really have to monitor their children on the computer," says Lauren Johnson. "Really look at their history behind what they're looking at, where they're going, who they're talking to."

One is to make convicted offenders register with physical addresses rather than PO Box addresses.

The other is for homeless, convicted sex offenders to have to list the place in which they're staying.

Even if it's a shelter.